Illinois Department of Natural Resources (IDNR) recently announced some much needed and welcomed State mining program improvements within the Office of Mines & Minerals (OMM). But, it’s only a start. As was evidenced by citizen frustration at a recent public hearing more changes need to be made, people need to be heard, and OMM needs to continue to improve program implementation . 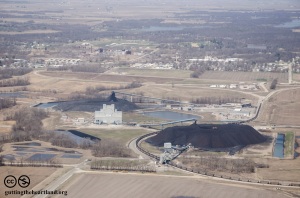 The Hillsboro Energy, LLC Deer Run Mine located within the city limits of the City of Hillsboro in Montgomery County has been a source of frustration for area residents since its inception nine years ago. The June 4th, Illinois EPA permit hearing regarding pollution discharges from a new, giant coal waste disposal area at the mine was no exception. The story has been one of a complicated and segmented permitting process, bait and switch tactics, and a very murky public process. 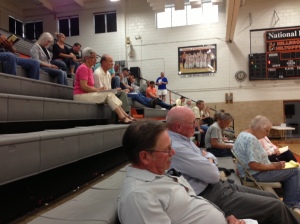 Wednesday evening’s IEPA hearing was particularly frustrating because of the ongoing, misleading tactics used by the mine operators. When the original OMM permit #399 was approved the public was told ‘there are no existing or proposed refuse impounding structures (dams) in the permit area’ [1], but later the original below ground disposal area was changed to an approximately 140-acre, 90-foot-tall high-hazard impoundment.

Less than 5 years later, because the first impoundment is not adequate to hold all the toxic coal slurry, the mine is now proposing to build a second disposal area nearly twice the size of the first with a 240-acre impoundment held back with a 60-foot-tall dam. Both impoundments will hold coal waste in perpetuity behind high-hazard dams [2] above the towns of Hillsboro and Schram City.

The IEPA hearings on the waste impoundment were limited in scope to discharges of pollutants and the mitigation for streams and wetlands the new impoundment will be built on. While residents are certainly concerned about the discharges, they believe the entire project has been misrepresented from the beginning and that they’ve never had a chance for their concerns to be adequately addressed in any meaningful way.

Area resident, Mary Ellen DeClue, points out that OMM never addressed the real issues in the community when it approved the Deer Run Permit. “OMM didn’t consider the two impoundments that will be a blight and threat forever in Hillsboro. It didn’t consider the negative impact on real estate values or the loss of property taxes with over 20 homes torn down. It didn’t consider the loss of our airport, the damage to our road, or the loss of our prime farmland. No consideration was given to the fact that county tax money covers the emergency action management of high-hazard waste impoundments, yet no sales or severance tax is collected on the coal that leaves the ground. OMM never considered our increased exposure to health hazards, the forced delay on county roads with coal train passage, or the contamination of our water and air. These are real social and economic effects from Hillsboro Energy, LLC.”

The hearing Wednesday evening was viewed as just another in a series of futile exercises in a process that needs major reform.

The following  is our assessment of where OMM is now and what improvements need to occur.

Transparent Public Process
Instead of requiring accurate and complete applications at the start of the permitting process, OMM routinely approves initial permits and then allows operators to make unlimited substantial changes through permit revisions. Residents have the right to know that what is initially being proposed is what they are going to be living with in the end.

OMM should have known at the time that the first Deer Run permit was approved that the coal waste storage area was not sufficient for a mine of nearly 5,000 acres. Hillsboro citizens and local officials had the right to know from the very start that they were going to be faced with living under the threat of at least two huge, high-hazard dams looming over their community.

In addition to requiring complete application the start of the permitting process, fees should be required for all reviews of permit revisions. The fees should be substantial enough to cover OMM costs for repeated staff reviews of changes at mine sites and to motivate mining companies to submit their complete plan at the start.

Some improvement shown recently with the commitment by IDNR to initiate a rule change to require mining companies to pay permit fee at time of application rather than after permit approval.

Protect Public Water Supplies from Coal Mining
OMM should not permit coal mines that threaten public water supplies. The Deer Run Mine is located in the watershed that feeds Hillsboro Lake, a backup water supply for area residents. The proposed new coal waste impoundment would sit in an area with a high water table and above a void present from earlier mining, which could threaten the structural integrity of the impoundment. The Deer Run mine is a threat to groundwater that feeds Hillsboro Lake.

OMM should not approve mining operations in watersheds serving as public water supplies.

Better protect Illinois’ natural resources
OMM needs to do a better job protecting our natural resources, water resources and prime farmland from damages resulting from coal mining and mine subsidence. Deer Run mine discharges into Shoal Creek watershed, adding pollution to one of Illinois’ finest streams and will subside nearly 5,000 acres of prime farmland.

The new proposal calling for OMM to not deem any permit application administratively complete until the IDNR Division of Ecosystems and Environment completes its impact assessment is a positive change, but farmland subsidence is an issue that literally falls through the cracks of the current system.

Bad actors
OMM should not give renewal or revised permits to operators that have previously and regularly violated permit limits. Deer Run has had a number of problems over last 3 ½ years meeting permit limits.

The people of Hillsboro and other mining areas of Illinois need the Illinois Department of Natural Resources to quickly get to the task of rulemaking in order to complete the promises that resulted from the Banner Mine decision and to continue with additional reform measures. The time has come for OMM to step up and Protect the Prairie State.

[2] The Hazard Potential Classification system considers the immediate physical damage that would result from the sudden release of the large volume of liquid and solid material held back by the dam or impoundment and categorizes dams based on the probable loss of human life and the impacts on economic, environmental and lifeline interests (critical infrastructure, highways, bridges, utilities). High-hazard potential means failure or miss-operation will probably cause loss of human life.

View all posts by Terri Treacy